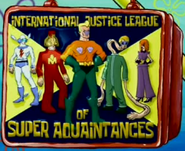 Add a photo to this gallery
The International Justice League of Super Acquaintances (The IJLSA for short) is a group of superhero sidekicks who originally fought alongside Mermaid Man. The League consists of The Quickster, Captain Magma, the Elastic Waistband, and Miss Appear. In the episode Mermaid Man and Barnacle Boy V , SpongeBob, Patrick, Squidward, and Sandy put on the costumes of The Quickster, The Elastic Waistband, Captain Magma, and Miss Appear respectively in order to stop Every Villain Is Lemons (EVIL for short). The IJLSA is a parody of the Fantastic Four, the Justice League, the Avengers, and The X-Men.

[1]Mermaid ManAdded byKrabsterThe International Justice League of Super Acquaintances is run and founded by Mermaid Man. He is the main leader but not the chief, similar to Superman's leadership with the Justice League and Super Friends. He orders pizza to his hero allies at the table instead of announcing brief missions.

[2]The QuicksterAdded byKrabsterThe Quickster has the uncanny ability to run really quick. This super speed was ultimately SpongeBob's downfall when he had to become the Quickster, as he was running around in a circle after getting hit with Captain Magma's eruption by accident, until he eventually melted and/or disintegrated though this is more likely due to him being on fire at the time. He is a parody of the Flash and Quicksilver.

Captain Magma wears a miniature volcano on his head. By shouting "Krakatoa!", he can erupt a blast of sizzling lava from said volcano. He can also use his volcano as sort of a makeshift jetpack. Captain Magma is extremely weak to Mermaid Man's water balls, as one of these water balls, misfired, hit Squidward, in Captain Magma costume, and quenched him. He is a parody of the Human Torch and Firestorm.

[5]Miss AppearAdded byKrabsterMiss Appear can turn invisible at will. However, she is still solid; Sandy, as Miss Appear, turned invisible, then got hit by a boat and hurled off a cliff. Miss Appear is a parody of the Invisible Woman.

The IJLSA vs. EVIL EditEdit

The battle between the International Justice League of Super Acquaintances (Mermaid Man, the Quickster (Spongebob), Captain Magma (Squidward), The Elastic Waistband (Patrick), and Miss Appear (Sandy)) and Every Villain Is Lemons (Barnacle Man, The Dirty Bubble, and Man Ray) was rather pathetic. Captain Magma erupted a burst of lava that hit the Quickster. The Quickster began running around in circles, screaming "GET IT OFF!". The Elastic Waistband attempted to save the Quickster with his hands, but they got caught; the arms overstretched, and The Elastic Waistband got hurled into the air, and landed on the ground, his arms in a tangled heap on top of him. Mermaid Man tried to cool off the Quickster by shooting a water ball, but instead hit Captain Magma with it. It was all up to Miss Appear. She turned invisible, and tried to sneak over to EVIL, unseen. However, she got hit by a Boatmobile, and fell off a cliff. Mermaidman then fell over, and EVIL won, without having to do anything.

Retrieved from "https://theadventuresofgarythesnail.fandom.com/wiki/The_International_Justice_League_of_Super_Acquaintances?oldid=12173"
Community content is available under CC-BY-SA unless otherwise noted.