Pearl Krabs II[3] is the daughter of Mr. Krabs.

She is a sperm whale, which means her mother was most likely a whale as well. She is revealed to be sixteen years old in the episode "Whale of a Birthday."

She is shown to be an extremely spoiled, entitled, selfish and insolent teenage girl, often demanding things (usually money) from her father and throwing tantrums whenever they are not met. Her ill-mannered nature is likely due to Mr. Krabs' poor parenting, him being too lenient on her and giving in to whatever she demands.

In "Selling Out," Pearl can be seen as a baby in a scrapbook. Mr. Krabs was holding her in the picture, so it is possible that he could have taken her. In another photo, Pearl can be seen riding a bike as a toddler with the guidance of Mr. Krabs.

Pearl is a teenage girl who interested in anything a normal teenage girl would be interested in. She sometimes acts like a crybaby to Mr. Krabs in episodes such as 'Squeaky Boots', 'Whale of a Birthday', 'The Slumber Party', etc. She also gets angry easily when annoyed. In Mr. Krabs 'Takes a Vacation'. Pearl makes her father give her money because he doesn't share even one dime with her, so much to his dismay.

Her attitude, she sometimes has a heart on others such as Sandy from 'Bubble Troubles', by helping her get air into the air helmet. In 'Bossy Boots', she wanted to turn the Krusty Krab into a teenage paradise to impress Mr. Krabs, without hurting his feelings. All she wants is to be a movie star and a cheerleader, in 'Culture Shock' she cheers for Squidward's talent show but ends with great disaster. And in 'Mermaid Man and Barnacle Boy VI: The Motion Picture', she wanted to be in a Mermaid Man and Barnacle Boy movie but her role is to be an Invisible Boatmobile, and in the real movie, she isn't in it, much to her disappointment. She likes hanging out in the mall with her friends as reveled in Whale of a Birthday and welcome to the Bikini Bottom Triangle.

Pearl is a gray whale with blond hair in a constant ponytail. She commonly wears a pink shirt with a dark pink letter P, which stands for Pearl, as well as a dark pink skirt and white boots. The episodes "The Chaperone" and "Whale of a Birthday" feature her with a light pink dress and a tiara on. When in this outfit, the hair holder that keeps her hair in a ponytail changes color from dark pink to light pink. She almost always has on reddish-pink lipstick in the shape of a heart on her 'lips'. In "Bossy Boots", it is shown that she does, in fact, have lips. She also has a blow hole. She always has her bossy 'friends' by her side. It is unknown if she is bigger than Larry the Lobster

Pearl acts like a crybaby in many episodes she's in. She is a mirror image of her father.

In Squeaky Boots. Pearl cries loudly when Mr. Krabs just gives her squeaky boots and she even cries more worse when he said it's from the bargain.

In The Chaperone. She doesn't want Mr. Krabs, Squidward and Spongebob to go out on a prom, but is forced to choose Spongebob. She treats Spongebob really badly in the prom at first.

In The Slumber Party. Pearl kicks Mr. Krabs out of his own home to stop embarrassing her in front of her friends, who was overprotective in this episode. She even bullies Girly TeenGirl, thinking she might be Spongebob. She continued bullying her without even knowing, leaving her crying. She also bullies Spongebob by having him open her father's root beer cellar; while one of her friends think he might be hurt, Pearl says he'll be fine. Then she punishes her father by spending his money at a private party in Goo Lagoon, without inviting him or SpongeBob.

In Tunnel of Glove. She was forced to go with Spongebob on the Tunnel of Glove, then she disobeys the announcer's warning and thanks to her, the ride is broken. She then becomes even more annoyed when Spongebob gets scared of things. She doesn't admit herself being scared when they get out.

In Best Frenemies. She berates Mr. Krabs to get his own Kelpshake, then when he sobs, she says that he embarrassing her again. She then pulls her leg from him, leaving him behind.

In Drive Thru. She harshly pranks poor Squidward by shouting at him through a megaphone, leaving him injured.

In Mr. Krabs Takes a Vacation. She is very upset that Spongebob has to come with them. She wanted a vacation alone with her father.

In Whale of a Birthday. She yells at her father by saying it's her 16th birthday, and gives a very long list about everything she wants on her birthday. When it initially appears to become the most terrible birthday ever, she begins crying as she pushes away some people.

In Selling Out. She once again yells at Mr. Krabs for disturbing her phone call, then she kicks him away before harshly telling him to get a job, get a hobby,and get some friends. She then slams the door in his face.

In the past, Pearl seemed to like him so much due to The Chaperone, their relationship grew stronger, however in The Slumber Party, she showed a strong dislike for Spongebob, it is unknown why, but Pearl seemed to be annoyed now by his actions but in some episodes, they had a like/hate relationship. In Spongebob's opinion, in Mr. Krabs Takes a Vacation, it seemed that Spongebob had a small crush on Pearl. Pearl is possibly one of the rival love interests of Spongebob.

Patrick ate one of Pearl's Krabby Patties in Welcome to the Bikini Bottom Triangle he doesn't like them as much as SpongeBob's and in Tunnel of Glove, he tried to get SpongeBob and Pearl out of the Tunnel of Glove, which they were stuck in.

Pearl and Sandy never interacted to each other officially, fans think they are rival love interests of Spongebob. In Texas, she was one one the townspeople who wanted Sandy to stay in Bikini Bottom. She and the rest cheering for Sandy that she decides to stay in Bikini Bottom. In Bubble Troubles Pearl helped Sandy by giving air to her air helmet and said that mammals need to be together.

Squidward and Pearl have an awkward relationship. In The Chaperone, Pearl refuses to go out with him to her prom. And in Welcome to the Bikini Bottom Triangle, he called her a 'drama queen', they were sunbathing while SpongeBob's Patty meter was empty. Pearl thinks that Squidward is such a barnacle. At the end of the episode, Pearl saves everyone by introducing the mall to the Mermaids.

Pearl's personality slightly matches Mr. Krabs' personality, Pearl always got humiliated about his overprotection of his daughter. But sometimes, Mr. Krabs wanted money more than Pearl, which made her deeply upset. 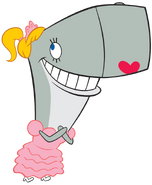 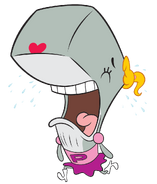 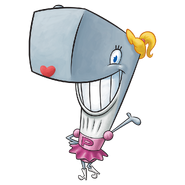 Add a photo to this gallery
Retrieved from "https://theadventuresofgarythesnail.fandom.com/wiki/Pearl_Krabs?oldid=18262"
Community content is available under CC-BY-SA unless otherwise noted.