Incidental 46 - Nazz-Mimi is a fish that makes many cameo appearances throughout the series. She has been the best student of Mrs. Puff, and she made her first appearance in the episode "Ripped Pants."

She is a light emerald-green fish who wears a red bathing suit and has light teal lips and light yellow and black eyes. She also has light blue fins. Like SpongeBob, she has three black eyelashes.

She is married to Frankie Billy and may be the mother of Billy, as revealed in "The Wreck of the Mauna Loa." Her ex-boyfriend is Gus, and she appears with him in numerous episodes. It is revealed in "Whirly Brains" that she is the mother of a green baby girl. She is sisters with Norma and Patty Rechid, whom she looks very similar to. She is also Fred's sister-in-law and Baby Rechid's aunt. 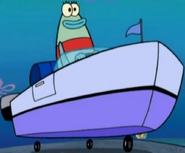 Add a photo to this gallery
Retrieved from "https://theadventuresofgarythesnail.fandom.com/wiki/Nazz_Mimi?oldid=18149"
Community content is available under CC-BY-SA unless otherwise noted.